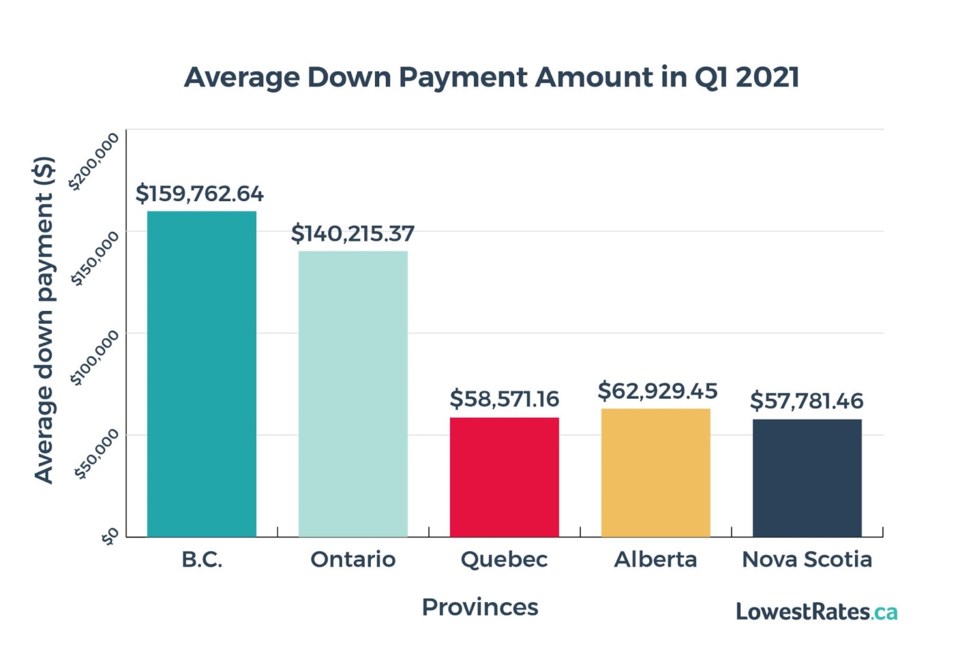 British Columbia homebuyers put down an average of nearly $160,000 to purchase a home during the first quarter of 2021, by far the highest level in the country.

B.C. buyers anted an average down payment of 22.45 per cent of the purchase price, or $159,762, to purchase a home. This is $101,191 more than the average in Quebec, where buyers paid the lowest down payments in Canada, according to a study released June 29 by LowesRates.ca.

The average composite home prices in B.C. and Quebec are $916,741 and $449,698, respectively, according to the Canadian Real Estate Association.

In Ontario, the average homebuyer this year is putting down $140,215, or 20.3 per cent of the purchase price, the report stated. The average composite home price on Ontario in the first quarter was $866,307.

The average down payments in Ontario and B.C. remained around 20 per cent because the average home price in those provinces is close to $1 million. A home worth $1 million or more is not eligible for Canada Mortgage and Housing Corp. (CMHC) mortgage insurance, so the down payment must be at least one-fifth of the purchase price.

Tighter lending rules, such as the revamped mortgage stress test, aren’t slowing the Canadian real estate market which is expecting a record-breaking 2021, the report noted.

“This could drive the average home price in Canada up about 14 per cent this year,”  according to LowestRates.ca

New mortgage borrowing across Canada increased 41 per cent in the first quarter compared to a year earlier, and the average amount for which borrowers were approved on new mortgages grew by 20.5 per cent to $326,930, according to newly-released data from Equifax.

“Despite a decline in Canadians’ credit card balances (their lowest point in six years), the number and amount of mortgages taken out by Canadians in 2021 has sent the country’s consumer debt soaring to about $2.1 trillion,” the report noted.

LowestRates.ca CEO and co-founder, Justin Thouin, forecast that historically low lending rates will remain in effect this year. However, Thouin predicts that borrowing costs will rise in the second half of 2022 as the economy recovers.